The Roman City of Wroxeter

Despite being a small Shropshire village today, the Roman City of Wroxter was once the fourth largest town in Britannia (after London, York and Lincoln)

There is no consensus as to whether Wroxeter had been settled in any way before the arrival of the Romans. Finds of pottery and flintwork from the late Neolithic period suggest that people might have lived on the site some 5,000 years ago or more, but this evidence is inconclusive

Archaeological investigation has revealed a cluster of burial mounds, which are likely to be from the Bronze Age and to have been created about 1500 BC. It has been suggested that the barrow cemetery was established at the same time as the banks of the River Severn were forming. This was the result of significant amounts of silt being washed into the river and then deposited to form its banks. This was probably caused by massive and sudden deforestation upstream, though this is only plausible conjecture

There was a ford of the river at Wroxeter, which would be found today just by the church in the village. It is possible that the barrow cemetery was situated so as to indicate the position of the ford. Yet, although this suggests human activity around Wroxeter, there is nothing to suggest that people were actually living there

When the Roman Army arrived in Wroxeter it is likely that they moved into a settled area with a farmed landscape. Archaeology has revealed two ditched enclosures at Wroxeter, one of which was excavated beneath the legionary fortress that the Romans set up. This was typical of the landscape for the Iron Age, and it reveals an overall pattern of arable and livestock farming. However, the lack of material finds suggests that the people from that time did not use much in the way of pottery, other than a type of coarse pottery

Metal finds are few and far between, though what has been found is of high quality. Coins, on the other hand, are noticeable by their absence, which clearly implies that they were not in use – at least, not in the Iron Age

The Roman Army first appeared about AD 47. It has been suggested that they easily destroyed the Cornovii settlement on the Wrekin, forcing the surrender of the Celtic tribe (see the entry for the Cornovii on the website). The Romans then decided to establish a garrison in the area before continuing their military campaign into northern and western Britannia. Initially, a small group of around 500 men (possibly including cavalry) was established in a fort on the east bank of the river; this was probably set up to guard the ford.

Later – in the 50s – a legionary fortress was set up and Wroxeter became the base first for the 14th Legion (Legio XIIII Gemina) and then for the 20th Legion (Legio XX Valeria Victrix). Although this fortress was protected to the west by the rover, there was no natural defence to the east. Just about every building, including the fortress, was constructed from wood. Eventually the 20th Legion was transferred to Chester – the fortress was levelled before the legion departed

The fortress had attracted a trading settlement, somewhat to the south of the fortress. Another settlement was established to the north of the fortress, which was probably controlled by the army. These were to form the basis of the town that developed after the legion had left. The town of Viroconium was the seat of government for the region that was once under Cornovii control. The government would mostly have comprised local lords and nobles, rather than pure Romans

The town was laid out with a grid pattern of 48 town blocks. These would not have been regular because the Romans had to respect the geography of the area. There were no initial defences. The town plan was ambitious, but it had no civic centre until the early decades of the 2nd century, when a start was made on the baths and the forum. Some have maintained that this was at the direct order of Emperor Hadrian, though no evidence in support of this has been put forward. Whatever the case, the baths were not finished until around AD 150. In the 1850s a colonnade of square-based columns to the north of the forum suggests the location of the town’s temple

The baths followed a standard design for northern parts of the Empire, where they needed to be less open to the weather as a consequence of the climate. The main entrance to the baths has survived as the ‘Old Work’ of today.

Defences were eventually constructed in the late 2nd century and comprised an earthen and timber rampart, probably topped with a wooden palisade. These defences were refurbished in the 4th century, when they were enlarged and the external double-ditch became a single, but much wider, ditch

The Romans left Britain early in the 5th century, though Wroxeter was to continue as a Romanised town for quite some time. Conventional ideas of the town being sacked by advancing invaders, notably Anglo-Saxon, are not convincing for Wroxeter. In fact, evidence for an Anglo-Saxon presence in Shropshire as whole is difficult to find much before the 7th century

Archaeology suggests instead that the basilica and the baths were maintained at Wroxeter well into the 5th century before being systematically dismantled in order to make way for newer, timber constructs.

The date of the abandonment of Wroxeter is difficult to ascertain and was probably not catastrophic – i.e. the population did not simply leave as one following one particular disaster. Instead, some people chose to stay in a smaller village that grew up around the ford – and which is still there to this day 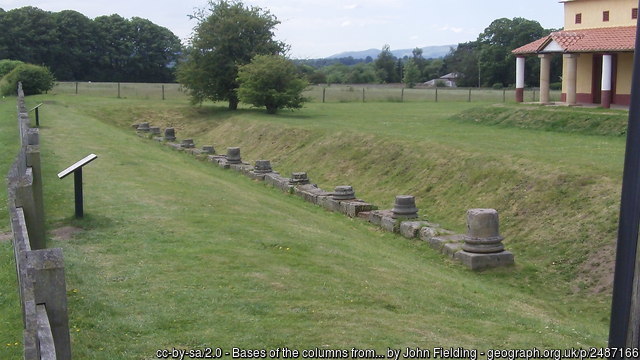 Click on the links below for some videos about Wroxeter:

Click here for a virtual tour of Wroxeter Roman City